When Dakar Eats asked me to write a guest post about the food of the Casamance, I was left scratching my head for a while. My wife, Khady, is a Diola from Kagnabo, a small village near Bignona and we live in Abene with our two sons. I asked her about Casamancais food but she was also stumped.

“It’s the same as the rest of Senegal – we eat mafe, thiéboudieune, yassa – it’s all the same.”

This isn’t strictly true and she later told me of a few local specialities which I intend to try. On a day to day basis I do tend to eat mafe, thiéboudieune or yassa. By this point though, I had remembered a trip I made in February with a restaurant critic from Minneapolis, his wife and another guest from Holland.

It was supposed to be an adventure to experience the local culture, the landscapes and wildlife, particularly the birds, and it was of course all of those things. However, when I looked back I realised that, to our great surprise, the meals got better every day and in some cases were sensational despite travelling in complete backwaters.

We started out just south of Kafountine. The tide was out and so we waded for several hundred meters down a mangrove channel where we met a boatman who took us across to one of the Karoninke islands. Although the walks were not overly strenuous, I’d perhaps underestimated the heat. For myself it was the cool part of the year but the Minnesotans had arrived two days earlier from the state where Fargo was filmed and temperatures dip to -20ºC or cooler. We arrived into the village of Couba in the early evening as it cooled and my friend Jean-Christophe Sambou was very happy to see us. He and his family welcomed us into there home where we ate Senegalese-style from a large bowl of locally grown rice with catfish and yassa sauce.

Chewy and nutty, Diola rice is a real treat after weeks of eating the typical broken gut-filler rice that is imported and eaten across Senegal. In the Casamance, youths return to their villages from Dakar and elsewhere every rainy season to prepare the fields with traditional Kadiandou spades and plant rice.

If you don’t have access to Diola rice, why not try some Rambo rice?

We then ate deliciously sweet grapefruits picked straight from the tree under a full moon and the African sky. It was simply wonderful.

Jean’s is a clean house with a lovely family, but it is an African house and this can take a bit of getting used to. Rats and bats scurried across the zinc corrugated roof keeping my guests awake all night. Chickens occasionally appear in your bedroom and as dawn breaks the place comes alive with the sound of animals, cockle doodle dooing, sweeping and the chatter of children. This, after all, is Africa.

Once a year, villagers trap tiny fish in paddies and collect them by sieving the water through a basket as I captured in this video. The fish will later be cooked in a stew with lemon and pepper.

Thereupon followed several hours marching like true mad dogs, led by one Englishman, across open dusty clearings, through dense palm forests and passed salt pans where cows gathered. Eventually we reached the village of Haere and called in at my friends, Dominic, brother of the village chief, and his wife Katherine. They were thrilled to see us and treated us to some typical teranga: delicious warm gazelle beers and a plate of swamp oysters that had been grilled on a fire and tasted sublime.

Swamp oysters are harvested by Diola women, traditionally by cutting the mangrove branch off although there are now programmes to grow them on ropes so as to prevent further environmental damage which is important given the mangroves role in preventing coastal erosion as well as them being fish breeding grounds.

During oyster season, they are typically boiled or grilled and served with a pepper sauce and rice. They are also left to dry in the sun for the low season when they are consumed dried or smoked.

Kjokkenmoddings are hills made of oyster shells and are common in these islands. In fact, the shells, after sunbathing for a year, can be ground up and used as cement. We have built one of our roundhouses at the Little Baobab using this material.

Later we lazed by the river sipping fresh bounok (palm wine). It was straight from the tree and as sweet as fruit juice as the sugars were yet to turn to alcohol. When two dolphins surfaced just before us, I knew for sure that I do actually live in paradise. 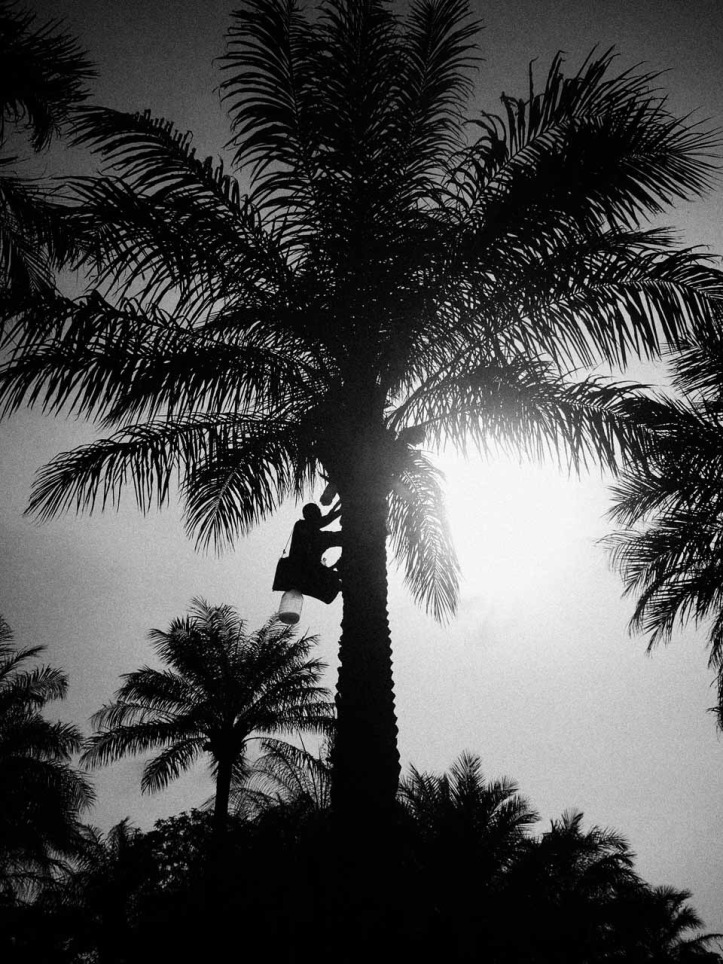 We arrived at Ile de Karabane on a pirogue and checked into the Hotel Carabane where we lunched on catfish with a Casamance classic – caldou sauce which is a light citrus tanged broth.

The next day we trekked along about 12 kilometres of beach to the village of Djembering, arriving at perhaps the only Irish pub in the Casamance, if not Senegal, Eddie’s shack on Sunset Beach. We arrived exhausted, hot and thirsty. As we entered, Eddie, an old friend of mine, handed us cold beers, huge crabs and prawns the size of my hand. Does life get any better? 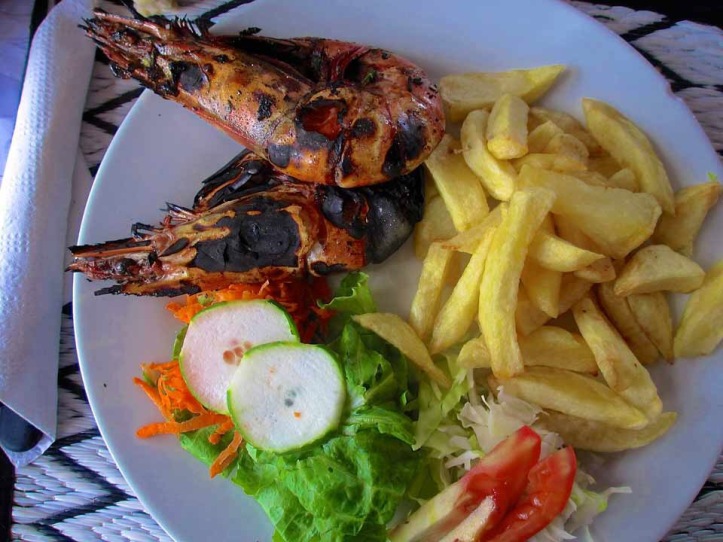 Djembering is a beautiful village at the base of a rare Senegalese hill and it appears to grow from the roots of the numerous huge baobab and fromager trees. With two of the finest chef’s I’ve come across in the Casamance, one can very easily enjoy a gastronomic feast there. Charlemaine runs the Asseb campement and cooked us a delicious duck dish. Upon a later visit I stayed at Akine Lodge where Anne prepared rabbit cooked in a creamy mustard sauce, lamb roasted all day with entire bulbs of garlic and what I have termed the fish pizza:

This was a far cry from my first visit to Djembering five years ago. Then, I found an inviting looking bar-restaurant that offered meat or fish. Having dined on fish twice a day for weeks I opted for meat. That evening, as I ate, I enquired what the meat was – it’s usually goat, but tasted more gamey, like venison.

I wasn’t too thrilled by that but at that point had nearly finished.

If you are determined to eat something exotic, you could always try the restaurant at the crocodile farm about 10km south of Ziguinchor: 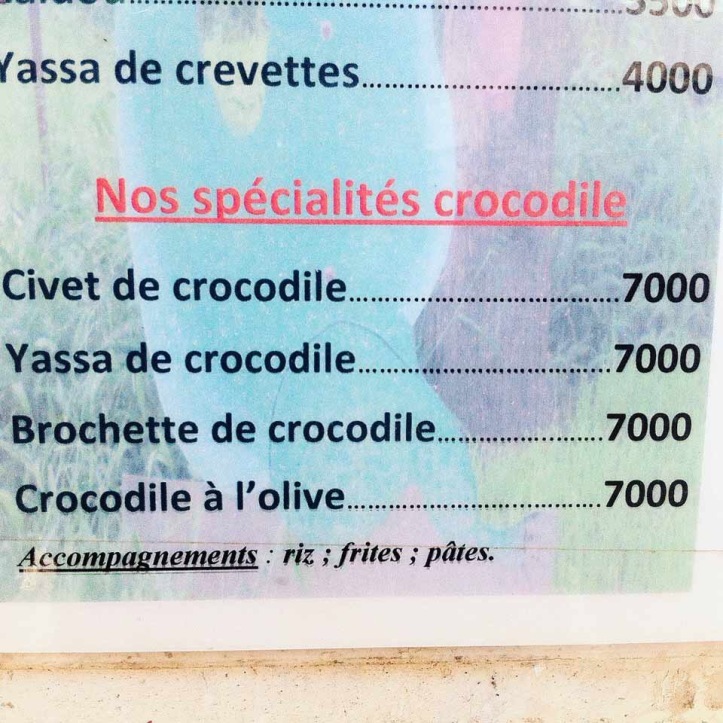 We travelled back to Abene using public transport with a lunch break in Ziguinchor. The regional capital, being inland, is usually several degrees warmer than the coast but it’s always pleasant on the verandah by the river at the Perroquet hotel which serves reasonably priced, decent European and Senegalese food. 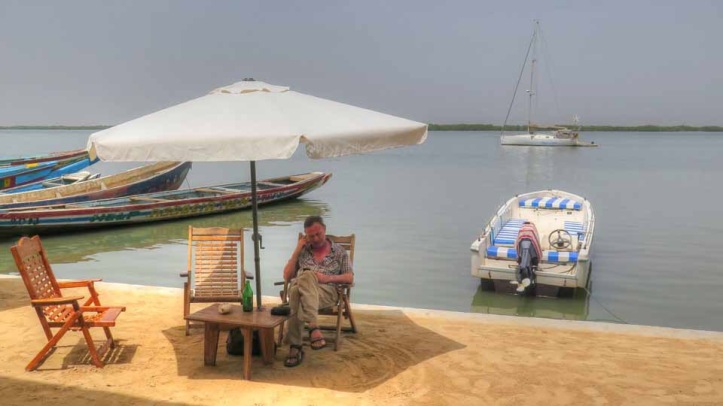 After a boat trip where we were surrounded by leaping dolphins and then floated gently through the mangrove creeks and mud flats viewing hundreds of flamingos, pelicans and other birds, we ate some tasty prawns with fries and salad before returning to what I think may be the best food of all in the Casamance – my wife Khady’s!

Simon Fenton runs the Little Baobab Guesthouse in Abene, Casamance, and regularly guides trekkers through the creeks and swamps between Abene and Cap Skirring.

He will be selling copies of his first book on the Chez Alpha stand at Lou Bess market on May 7th.

Dinner is a hit! Even if it is half the fridge thrown together. 😂 Broccoli, coquillettes pasta, Swiss Chard from @taaruaskansn, rotisserie chicken from Casino, puréed white beans to thicken white sauce with Gouda. And some leftover🥓.
Restaurant La Calebasse’s gospel night deserves every one of its listings in guidebooks and websites on must-do spots in Dakar. NEW on www.dakareats.com!
I order from Marie's Kitchen every week. I know it’s good stuff. But just now got a message from a friend who tried her tortillas for this first time and confirmed they are amazing. I agree. 😁 Also love the Casamance honey, homemade granola made with fresh coconut and whole wheat English muffins. Call 775367887 to order. Delivery available for 1500 CFA. #marieskitchendakar
Word on the street is that Guinea is not sending avocados this way. Can anyone confirm, deny or point me to an avocado vendor?
Happy morning! 🍵
This week’s breadmaking: ✅