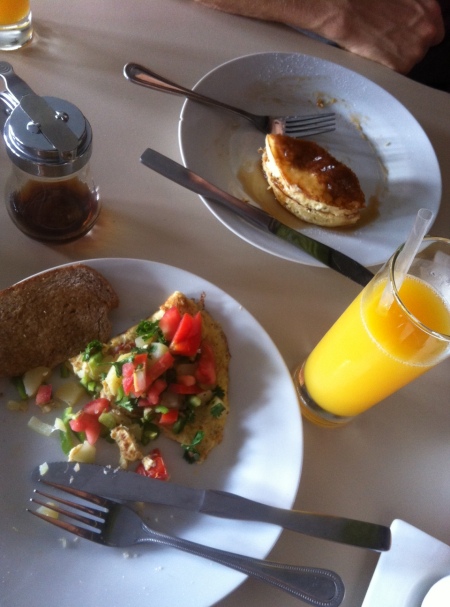 I’ve often griped about the shortage of good breakfast options in Dakar. (And of course, by ‘good’ I mean not just baguette and jam.)

So I was very excited to see the menu from M&M Bistrot which opened a month ago on route de Ngor. Pancakes, waffles, omelets, hashbrowns… (Not to mention burgers, tacos, burritos, quesadillas and fajitas on their lunch and dinner menu. But that’ll be another post.) 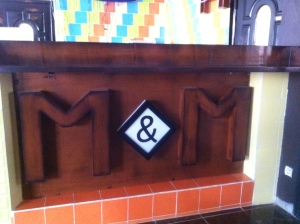 The owner lived in the US for many years and worked in hospitality, so there definitely some American touches at M&M. For example, when the server asked if we want the pancake syrup warmed, I nearly fell out of my booth. The only downside is that they don’t serve pork bacon or pork ham. But that’s totally understandable and to be expected here in Senegal. 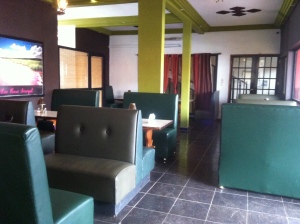 We ordered two lattes, pancakes and a veggie omelet – and we ordered in English, I might add.

The coffees were delicious, strong and with plenty of milk. The breakfast meals were presented well and tasted… Mmm-yum. It’s been a long time since I had buttermilk pancakes with warm maple syrup. I kept saying, “These are so good. These are so good…” And the omelet was very good too with plenty of veggies, not greasy and cooked well. We were very, very pleased and will definitely go back for breakfast. I’ve got my eye on waffles next… 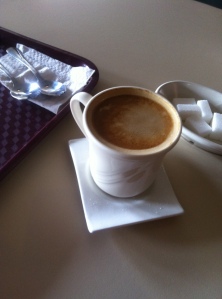 They have wifi, AC, a pool table, clean bathrooms… One good thing to know is that since they are located on the second floor, the big green M&M Bistrot sign is up high on the building. So when you’re cruising along down route de Ngor, you may not see it at first. It’s on the same side of the road as the Shell station, but directly across from restaurant Katia. 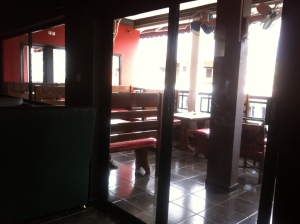 Let me know if any of you beat me to going back to try their Tex-Mex menu items! 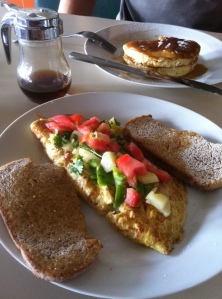